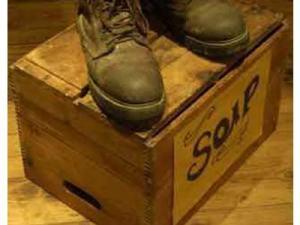 Welcome to the Alternate Soap Box 2016-1. I apologize for the inconvenience, let’s just say that we’re ‘remodeling and having issues. I think you are all great Americans and I appreciate you spending your time here and sharing your views with us, even if we disagree—we do so amicably.

‘Toon of the Day

Wishing you and yours all the very best in this time of tumult and uncertainty.

I wanted to thank all of you veterans who have worn the uniform and done your duty and are still doing your duty. Your devotion to the spirit of Liberty and your defense of it, is something that I fear many Americans do not understand and take for granted. I do not take your service for granted and I salute you.

I would like to make a special mention. Little, if any, history is really taught in our schools anymore and I think that is as tragic as any horror of war that you want to imagine. America should be proud of its history and own it shamelessly. History ignored, is doomed to be repeated.

On Oct. 20, 1944 United States Military forces land on the island of Leyte in preparation for the Philippine Invasion. WW ll has raged for nearly three years since the surprise attack by the Japanese at Pearl Harbor and many of the islands previously captured and controlled by the Japanese have been retaken by the advances of General MacArthur and Admiral Nimitz. The Japanese have suffered heavy losses of ships and planes in the process. The next step would be the Philippine Campaign.

The invasion force is protected by the US Third Fleet, commanded by Admiral Halsey, whose ships are staged east of Luzon and north of Samar–they know the Japanese are coming it is just a matter of when and where.

The largest most intense naval engagement in history will last three furious days. It is the Imperial Japanese Navy’s ‘final stand’ against a determined allied opposition.

SHO-1 is a massive attack plan devised by the Japanese. It is a desperate attempt to halt the American advancementto prevent them from invading the Philippines. The remaining forces of the battered Japanese navy have divided into three groups: Center Force, Southern/Second Force and a group of four Carriers (which are nearly out of aircraft) that the Japanese hope will serve as decoys. Approaching from the southwest, the Southern Force will sail toward the US invasion Fleet through the Surigao Strait. The Center Force will cross the Sibuyan Sea to the north and the decoy carriers will approach from the north-east to attempt to draw Halsey away from the main battle – a classic “pincer movement.”

This complicated, tumultuous engagement will finally hinge on heroic actions of one tiny American defense force  …

Having been awake all night, on the morning of October 25, LCDR Copeland of the USS Roberts was listening to the radio reports of the Seventh Fleet as they battled the Japanese’ Second Force in the Surigaoa Strait. He was attempting to get a cup of coffee when he was informed by CIC that “… surface radar reports that they have a contact … bearing about three-zero-zero approximately thirty or forty miles away …” Shortly thereafter, “… object on the horizon …” was announced …

The Imperial Japanese Navy’s “Center Force” is closing in from the north at 3o knots. Admiral Kurita has not retreated. He had reversed course and under the cover of darkness he has navigated the San Bernadino Strait unnoticed.They had escaped the previous day’s battle and suffered significant losses, yet were seemingly determined to thwart the American invasion of the Philippines. However, Taffy 3 woulod have something to say about that.

I’m not going to tell the whole story here. I can’t do it justice and I have been researching it off and on for four years and I have not concluded my studies. However, I have come across a variety of photos, video and written accounts of the battle that moved me to such tears of pride and awe that I to go ahead and tantalize you with some of what I’ve learned.

The purpose, ferocity and selflessness with which these outstanding men fought is nothing short of remarkable. These men were not trained to fight battleships and cruisers and they were sorely out-gunned, yet they knew what they had to do and they did it. This is American exceptionalism at its finest. This is the tenacity of freedom. This is the unapologetic refutation of tyranny in its face.

Lt. Robert Hagen to CDR E.E. Evans, of the Johnston, as they fearlessly charged the Japanese:

‘Please, sir, let’s not go down before we fire our damn torpedoes.’

These men knew they were the only thing separating the Japanese from the vulnerable invasion force on Leyte and they gave the Japanese Hell. Admiral Karita is stunned by the ferocity of the American response and believes he must be up against Halsey’s entire 3rd Fleet. In one of the most stunning moments in all of history, Karita turns his forces around and retreats. The destroyer Johnston and the tiny destroyer escort Roberts have given the Japanese Imperial Navy all that they can stomach and have convinced them to turn tail and run.

The Japanese suffer a devastating defeat. The Japanese lose 26 vessels and approximately 14,000 sailors in the largest most intense naval battle in the history of the world, spelling the demise of Imperial Japanese Navy.

There is still tyranny in our world today and it is sad to think where some of it resides. Considering the shining light of duty and devotion that I proudly give tribute to here, I should think we could find the determination that these fine men had to right our course to pursue freedom for all, as opposed to some fool’s ideological checklist.

Here are a few videos that touch on the varying events that make up the Battle of Leyte Gulf: